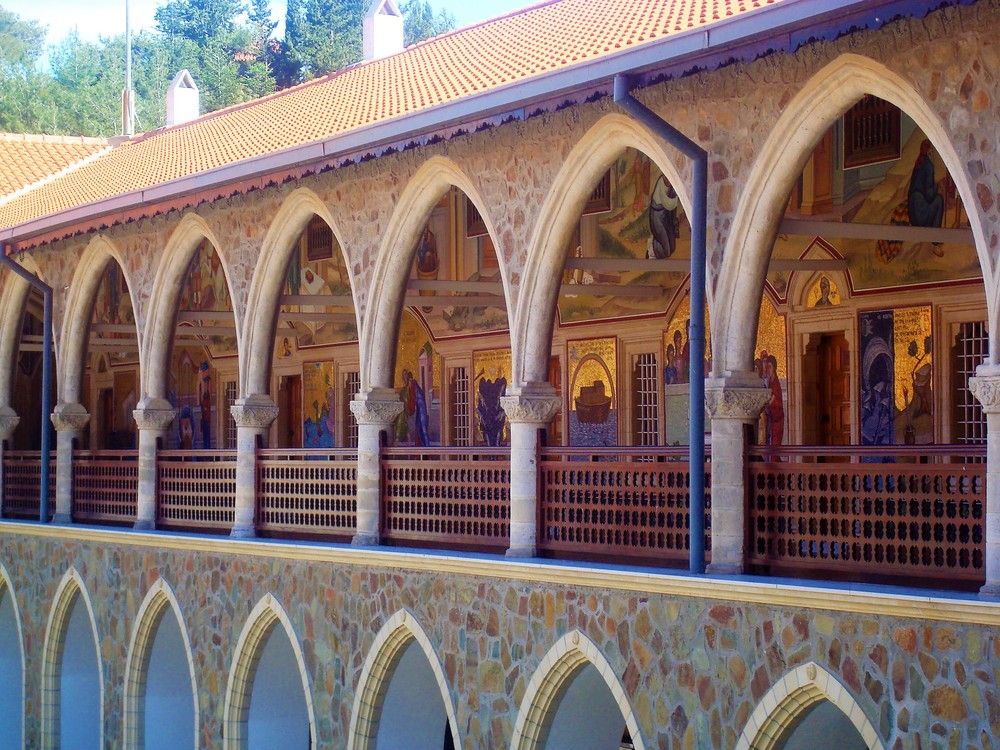 By Edite Strautmane
Published on 11 May 2018, viewed 2385 times
Category: Places to see
Share this article:

Welcome to the richest Orthodox monasteries on the island of Cyprus - The Holy Monastery of the Virgin of Kykkos! There is a spectacular mixture of religion and commercial enterprise, national hero’s tomb and the nearby EOKA hideouts. We can surely say that it is one of those places which, if you have not seen, you have not been in Cyprus.

It is situated at an altitude of 1318 meters on the north west side of Troodos Mountains. It is about 20km west of Pedoulas and the Marathasa valley.

This beautiful and amazingly rich place (it is noticeable everywhere you go) was founded by Byzantine emperor Alexios I Komninos in the 11th century. Many bizarre events have happened in the monastery – series of fires - therefore there are no remains from the original building, however, the building, we see today, dates back to 1831.

The legends behind the Kykkos Monastery 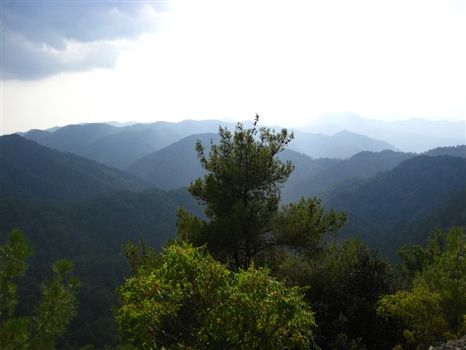 The story behind this beautiful monastery goes back to a hermit Esaias (Isaiah). He lived in a cave, nearby the site. One fine day Esaias met a hunter in the forest who was lost. It turned out that the 'lost' man was Manouil Voutomytis (Manuel Boutoumites - also the Byzantine governor of Cyprus). He was spending the summers at a village of Marathasa. Voutomytis asked for directions. As a response, he received vows from Esaias. Being a rather self-important man, he took such a response from the hermit an offence and was cursing at him, trying to give him a lesson for such an 'unacceptable behaviour'.

Leaving in anger, Voutomytis headed to Nicosia. On the way, he started feeling very ill. He figured that must have happened because of how he mistreated Esaias in the forest. So he decided to go back, find the man and beg forgiveness, hoping to improve his health.

Meanwhile, Esias saw a vision from God, telling him to give a task to Voutomytis - to bring an icon of the Virgin Mary all the way from Constantinople to Cyprus.

It took a lot of effort but Voutomytis eventually managed to fulfil the hermit's request to bring the icon to Cyprus. He convinced the emperor in Constantinople that his daughter would be saved from the same illness Voutomytis suffered if they did exactly what the hermit (God) had asked. In desperation to save his daughter the emperor agreed. His daughter became well instantly. The emperor called in a first-class painter and ordered him to paint an exact copy of the icon of the Virgin Mary to be able to send the original to Cyprus.

Esaias received the icon and, according to another legend, the trees were participating in the welcoming ceremony of the icon - they were bending their trunks and branches while bringing the precious icon from the coast to Troodos. A church and monastery were built at Kykkos, where the icon of the Virgin still remains. 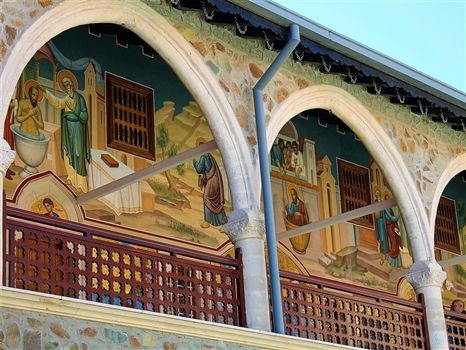 According to another local legend, that is still preserved by the locals, a bird with human voice was flying around the area singing:

Kykkou, Kykkou, Kykkos' hill
A monastery the site shall fill
A golden girl shall enter in
And never shall come out again


The "golden girl" is, the icon of the Virgin while the monastery is the Holy Royal and Stauropegial Monastery of Kykkos which has been sheltering this holy symbol for centuries.

It is believed that the icon was painted by St Luke and is one of only three have survived until nowadays.

Throughout the centuries locals have experienced real miracles in icon's presence. One of which was a locust devastation in 1760 and it is believed that worked against this struggle. It also has been used as a template for depicting the Madonna in Eastern Orthodoxy.

The icon is never looked at. For centuries it has been stored in a sealed, silver box in the Kykkos Monastery. The top half of the icon remains hidden behind a protective covering as it is said that whoever looks at it will be blinded. The last person to have seen the icon is the Patriarch of Alexandria Gerasimos, in 1669.

The icon is rarely uncovered, although this does happen. In fact, very recently there has been a drought affecting Cyprus. Fathers took the icon to her throne, and read special supplications for rain, whilst strictly looking away from the uncovered icon.

Other relics in Kykkos

On the right side of the icon there is a bronze arm and sword fish saw. Both items symbolize specific events in the past. The arm represents a story of a Turk who tried to light a cigarette with one of the vigil lamps. It is believed that he was cursed and suffered a gangrenous arm. The saw represents the gratefulness of sailors who prayed to the Virgin of Kykkos to save them from the storms and disasters in the sea.

The Monastery Museum is organized into antiquities, documents, vessels, vestments and ornaments from the early Christian and Byzantine times, icons, frescoes and woodcarvings, manuscripts and books and so much more. Anyone would be impressed by the extensive collection and the beautiful exhibits.

Upon the entry into the monastery you will walk through a beautifully decorated porch into a perfectly kept courtyard with a museum on the left side. A wooded hillside with a recently built bell tower will be seen just above the rooftop. Passing beyond the main courtyard visitors are free to explore the passageways, steps and the beautiful paved courtyards.

The monastery church is lined with icons (including the famous one of the Virgin within the protective case). There is always a line of supplicants who wait there to kiss the saint icon.

Kykkos monastery also maintains separate grounds in Engomi, Nicosia called Metochi tou Kykkou (Μετόχι του Κύκκου). The land on which it lies was acquired over the years by the monastery at that time in the outskirts. Nicosia had expanded quickly and the property had become one of the prime properties. Surprisingly, a big part of it is still used for agricultural purposes.

In 1926 the first President of Cyprus, Archbishop Makarios III started his ecclesiastical career in Kykkos as a monk. In 1974, whilst Archbishop Makarios was under pursuit by the military junta, he headed for refuge here. The building was hit by tank fire and part of it collapsed. He also requested to be buried there after his death which happened in 1977. His tomb lies 3 km west of Kykkos monastery and is a popular visitor destination.

Today, the monastery produces Zivania spirit and other alcoholic drinks and holds religious fairs on September 8th (Birth of the Virgin) and August 15th (Dormition of the Virgin).

We suggest visiting Kykkos early in the morning, as it can get much busier later on the day, especially on weekends.

Dress conservatively (though shawls and cover-up clothing are provided).