Kourion - the ancient kingdom of wealth and power

Kourion - a major ancient city  -  a colony of Argion - one of the wealthiest and most powerful ancient kingdoms in Cyprus at the time. It dates back to the early Neolithic period (4500-3900 B.C.) . The settlement is located only 18 km west from Limassol and is a must visit for historians and archaeology enthusiasts.

The owner of Kourion was Curieus (also Curias), son of Kinyras  - 'culture-hero' of early Cyprus and father of Adonis and Myrrha and Aphrodite's priest. Kinyras has been a real 'Jack-of-all-trades' of the time. He is known for not only being one of the greatest kings of the time, but also a metallurgist, potter, inventor and has been connected with shipbuilding, the perfumed oil industry, and building materials.

Today Kourion has become one of the most visited ancient sites in Cyprus. The detailed floor mosaics, astonishing mansions, yards and smart technologies (for those times) clearly show the lush and wealth of higher society of the 4th century A.D. The whole settlement of Kourion consists of several important ancient monuments that have been recovered and preserved until nowadays to tell the story. 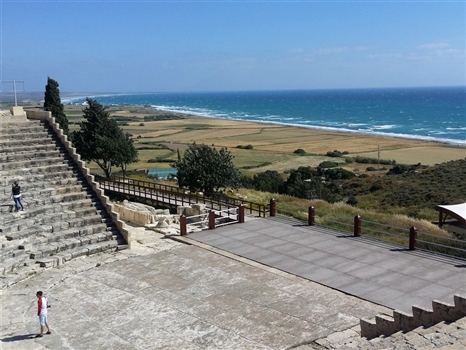 The Ancient Kourion Theatre
The amphitheater dates back to the 2nd century B.C. with a capacity of 3500 spectators. The stage foundation has been preserved until nowadays but during the Roman period, it rose full height. The stunning view towards the Mediterranean sea makes it even more unique. Theatre performances of ancient tragedy on summer nights are still held here today.

The House of Eustolios
It is believed that initially this part of the settlement was built as a private house and later transformed into a public recreational place. It dates back to the 4th - 5th century AD. It comprises 35 rooms around the inner courtyards and smaller dimension baths. Detailed mosaics cover most part of the building. On the highest level of the house, you will find Roman baths and a big mosaic covered room which was part of the bath complex. Apart from the important role in physical and mental health, the bath complex served as a meeting and socializing place. The complex included dressing rooms, a room with a cold bath, the room with warm bath and a room with a hot bath etc. This is a perfect place to see how the first, rather impressive, heating and sewerage systems were built. 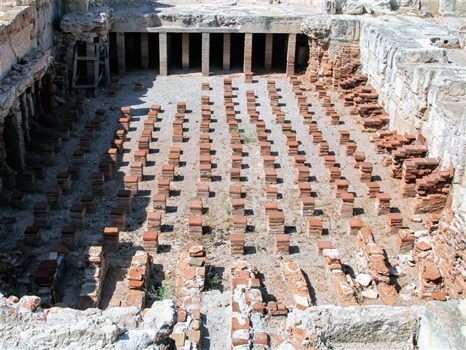 The Forum and Nymphaeum and Forum Baths
Built in the late 2nd century, this place was the center of Kourion's public life and was dedicated to the Nymphs - protectors of water. The northern portico led to the nymphaeum and bath complex. The Nymphaeum is believed to be one of the largest monuments of this kind in whole Mediterranean. It was used as a gathering place and it is also believed that ceremonies in honor of Nymphs were held here.

The Early Christian Basilica
The cathedral of Kourion was built in the beginning of 5th century AD. Right next to it you will also find the house of the Bishop and the Diakonikon.

The House of Achilles
The ruins of this building are located next to the old Limassol-Pafos road. This roman residence built in the 4th century A.D. with a central colonnaded courtyard is also decorated with mosaic floors. One of these depicts the scene, Odysseus, revealing the true identity of Achilles in the court of Lycomedes. It is believed that this space was used for the reception of distinguished visitors.

The House of Gladiators
This house is located near the House of Achilles and got its name after the mosaic pictures, depicting gladiator fights. It had a central yard, surrounded by galleries and various other rooms. 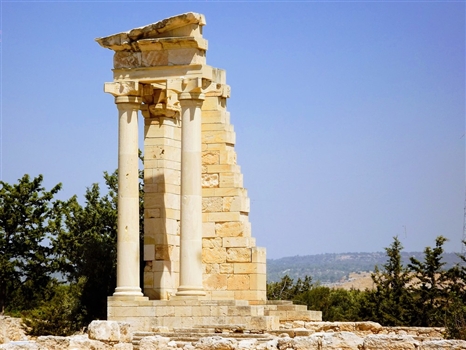 The Sanctuary of Apollo Hylates and The Temple of Apollo
The Sanctuary is located approximately 2.5 km from the city. It was one of the main religious centers and pilgrimage destinations of ancient Cyprus for more than 1000 years. Here pilgrims arrived from afar places to worship Apollo - the God of Woodlands. The building could accommodate large numbers of visitors. After proclaiming Christianity as the only religion of the Roman Empire in the 380 AD, the Temple of Apollo was slowly forgotten, setting an end to the paganism era.

The Stadium
The Stadium is located to the east from The Sanctuary of Apollo. It used to be a central place for sports events and competitions with a capacity of up to 6000 spectators.