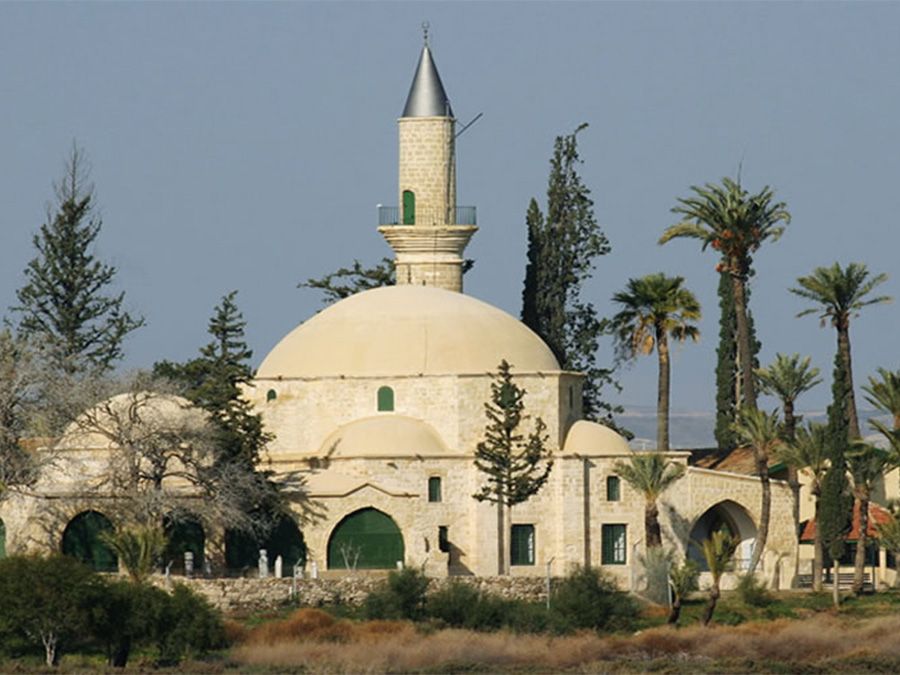 Hala Sultan Tekke is a unique complex which includes a mosque, mausoleum, minaret, cemetery, and living quarters for men and women. The mosque is one of the most important places of worship  for Muslims ranking right after Mecca (Medina in Saudi Arabia) and Al Aksha (Jerusalem).
'Tekke' (convent) applies to a building designed specifically for gatherings of a Sufi brotherhood, or tariqa. It lies in serene surroundings, on the shores of the Larnaca Salt Lake - another important site of the area.
This beautiful mosque was built in 648 AD on the spot where Umm Haram died. Umm Haram was related to the Prophet Mohammed. It is believed that Umm Haram was either an aunt or close friend of the prophet Mohammad. She had also followed Mohammed in his Hegira (withdrawal) from Mecca to Medina in September of 622 A.D.
During a short visit to Umm Haram’s home, Mohammed shared a vision of Allah with her. He said that Muslim believers would spread their faith in the Mediterranean Sea region. He also mentioned that she would be among the first to take part in the conquering of the islands.
Indeed, later the Governor of Syria, Moawiya, launched a naval expedition against the Christian Byzantine nation in Cyprus. During these Arab raids for the Mediterranean Sea region, Umm Haram was to accompany her husband on this military expedition. According to traditions, famous women would accompany their husbands and brothers on the raids to increase the warrior spirit and look after their wounds.
The Arab naval force attacked Cyprus with a fleet of 1700 ships, successfully defeating Cyprus forces. After the success of the campaign, Umm Haram together with other conquerors came ashore and was eager to celebrate the victory. A lush celebration was prepared with a parade and marching. Umm Haram was given a position of honour due to her relation to the Prophet Mohammad. She was riding a mule in the parade. As the victory parade progressed inland, the Arab forces were attacked by a marauding group in the Mediterranean region - Genoese. During the attack Umm Haram fell from the mule, sustaining serious injuries that caused her death. She was buried exactly where she had fallen. Grand Chalif Moavia immediately ordered the construction of a mosque which was constructed around her tomb.
Opening Hours:
September 16 - April 15
Daily: 08:30 - 17:00
April 16 - September 15
Daily: 08:30 - 19:00
Closed on Christmas Day, New Year’s Day and Easter Sunday (Greek Orthodox).
Entrance: Free
Disabled Access: Partly accessible
Cyprus Coast Mosque