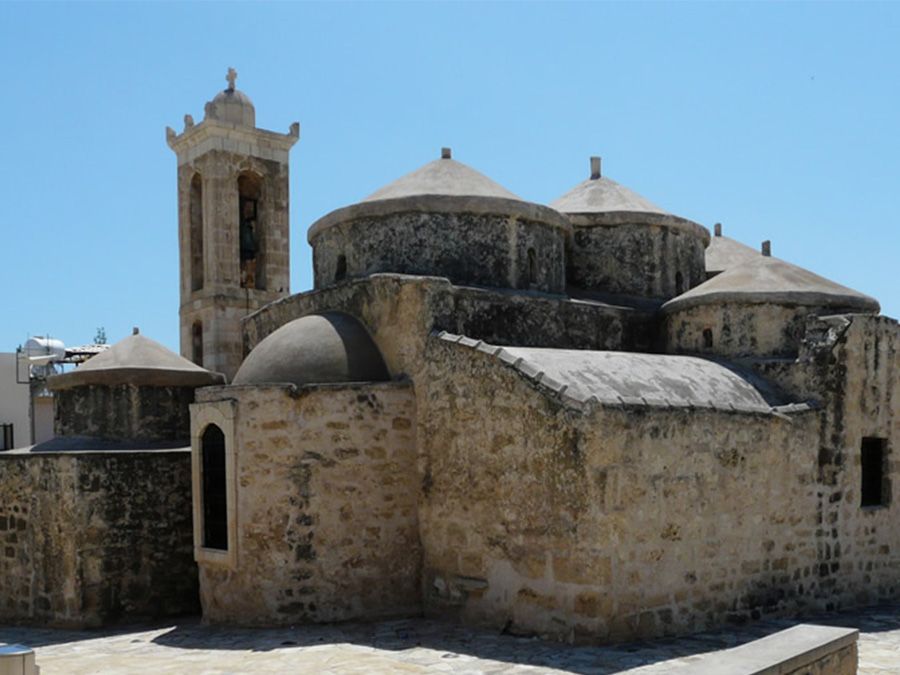 The church of Agia Paraskevi is located in the village of Geroskipou, only 3,5 kilometers east of Pafos. This church is a significant example of Byzantine Architecture, dating back to the 9th century. It is believed that the church is built on the ruins of an ancient temple dedicated to the goddess Aphrodite, however, this implication has not been verified.
According to Geroskipou traditions during the ancient times when people of Cyprus worshiped the 12 Gods of Olympus, this place was the "sacred garden" of Aphrodite hence the area was called "Geroskipou" or "Yeroskipou". It was located to the south of the village towards the sea.
Pilgrims from Nea Pafos passed through Geroskipou before going to the sanctuary of Palaipafos. At Geroskipou, donations, sacrifices and many other activities in honor of Aphrodite were taking place. Even today a natural cave with a pool is called 'Bath of Aphrodite'.
The church's architectural plan belongs to the type of the five-domed, three-aisled, barrel-vaulted basilica. It was built in the middle of present-day Geroskipou and extended in the 19th century.  In the interior, the church is decorated with wall-paintings dating up to the 8th-9th centuries. Even though the church resembles the church of Agios Varnavas and Helarionas in Peristerona, and to a lesser degree the churches of Apostle Varnavas near Salamina and Agios Lazaros (Larnaca), it holds its own uniqueness - frescoes, dating back to the 9th century, which are of the oldest in Cyprus. Apart from frescoes representing the Byzantine art, there is also a significant portable icon from the 15th century. It is painted on both sides. One side portrays the All-holy Virgin Mary with the Child and on the other side the Crucifixion with rather unusual colors.
From Pafos, take bus 606 or 616 from the Harbour Bus Station and bus 601 from Karavella station.
Operating Hours: Monday - Saturday: 08:30 - 13:00 / 14:00 - 16:30
Sunday visits can be arranged upon request.
Operating Period: All year round.
Entrance Fee: Free
Contact No: Tel: +357 26 821 000
Cyprus Village Church