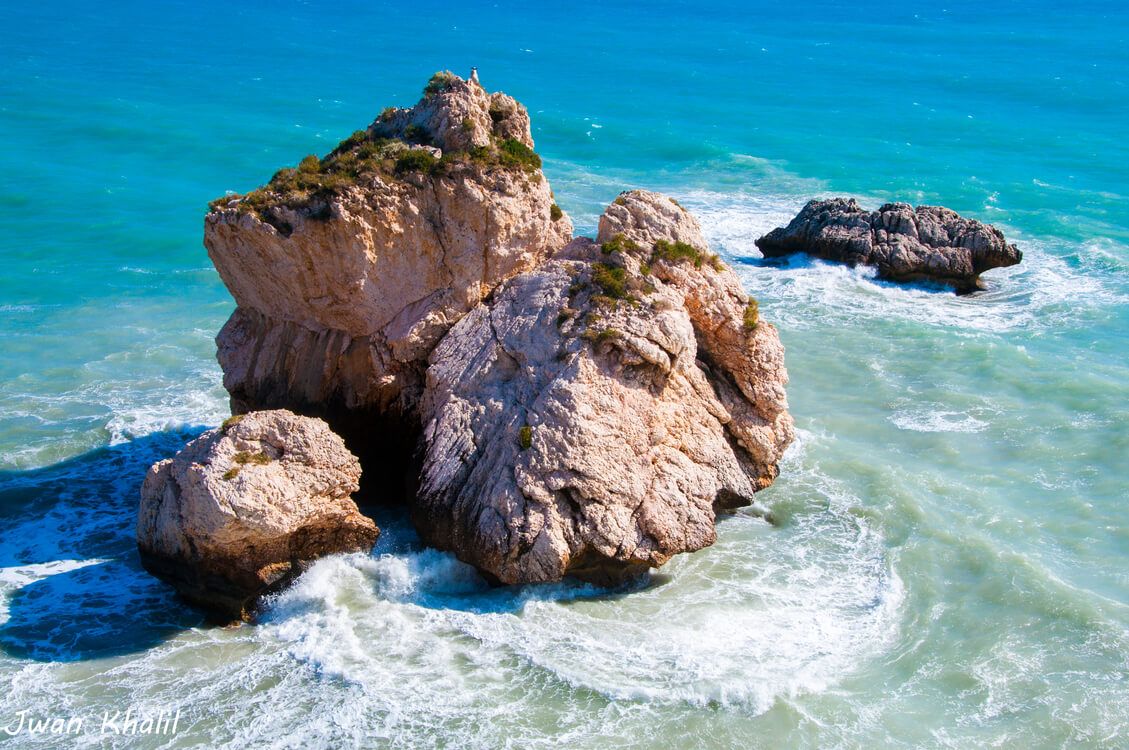 Aphrodite's Rocks is a mythical place on of the most beautiful coastlines in Cyprus, surrounded by  legends and stories throughout centuries. Today it is one of the most visited beaches and is not something to be missed, if you are in Cyprus.
According to one of the legends, Aphrodite - the Goddess of Love and Beauty was born of the sea foam. It tells that she rose from the waves and was brought to the beach on a shell. It is said that in certain weather conditions, the waves rise and form a column of water that dissolves into a pillar of foam which momentarily looks like an ephemeral, evanescent human shape.
On the rock there are corals, seaweed and pieces of shells and it is surrounded by other smaller rocks in the sea. Another myth  states that this rock and the surrounding ones are part of a great shell which carried the goddess Aphrodite to the shores of Cyprus, after travelling the seas and oceans.
More dramatic legend states that Gaia (mother Earth) told Cronus to mutilate his father Uranus. Cronus ambushed his father and cut him below the waist with a scythe. Uranus as he tried to escape, lost parts of his body and his testicles dropped into the sea. A white foam (aphros) appeared from which Aphrodite arose.
Another legend states that one of the Byzantine heroes Digenis Akritas had thrown the rocks there to destroy ships of Saracens (nomadic people from the Sinai near the Roman province of Arabia in the early centuries CE)  during an invasive raid. This is also where the name 'Petra tou Romiou' comes from.
It is strongly believed that swimming around the rock three times will bring various blessings, such as eternal youth and beauty, good luck, fertility and true love.
Since 1998 Petra tou Romiou is also a part of the "NATURA 2000" network. Cypriota Curcutius lizard, commonly known as "Arkokourkoutas" thrives in the region,particularly on the rock during the summer period. The Cypriota Curcutius differs from other lizards by its black colour, the round-shaped head and the scissor-like tail.

This site is also linked to the Aphrodite Cultural Route, which is worth to try if you are into exploring and outdoor activities. The beach is extremely beautiful with clear waters - absolutely perfect spot for honeymooners and everyone to see a mesmerizing sunset.