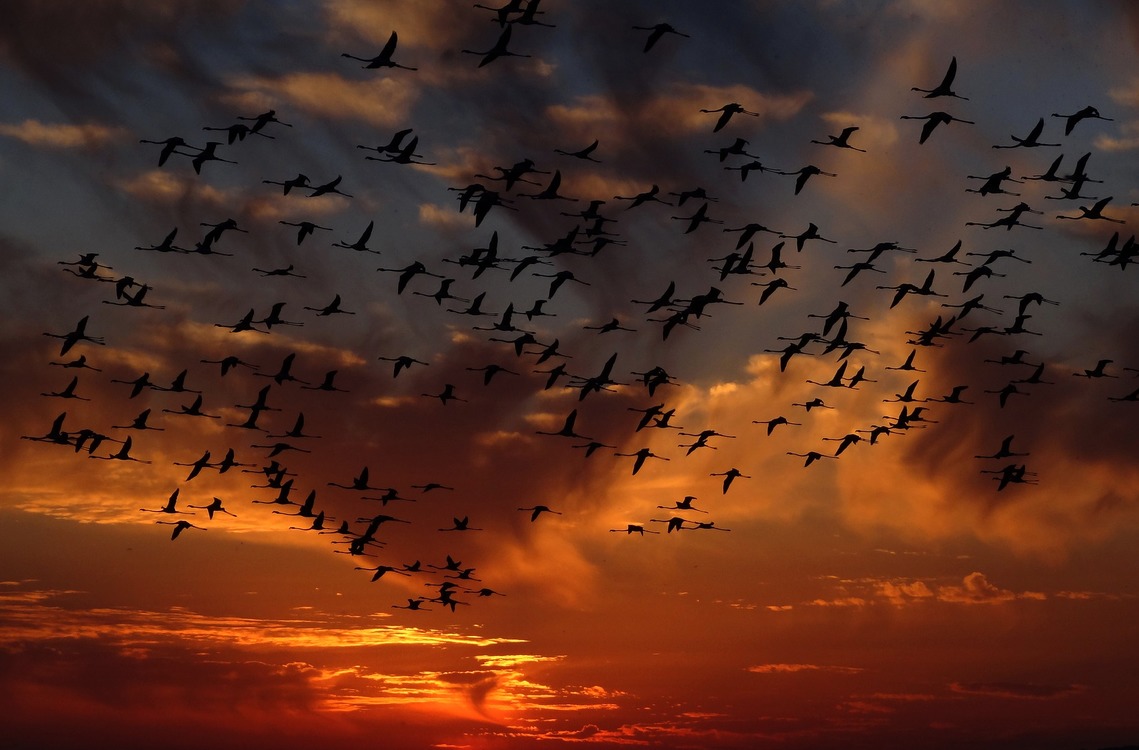 If you ever looked up information about Cyprus, chances are that you have seen some gorgeous shots of flamingos. These stunning creatures are frequent guests of the island, gracing everyone with their presence every winter. Thousands of tourists come to Cyprus just to witness these fabulous birds. Do you want to know when and where you can catch a glimpse of them? Let us tell you all about it!

During the rainy season between November and March, Cyprus becomes a desirable destination for many migratory birds. Flamingos are especially attracted to the island because of its wonderful weather conditions and delicious brine shrimps. As a matter of fact, brine shrimps are their favourite food!

These pink birds travel from all over the Mediterranean region to settle in Cyprus for the winter. They arrive from the nearby islands, North Italy, Turley, Sardinia and Iran salt lakes to warm their feet in the waters of Cyprus lakes.

Flamingos seem to really like Cyprus, as more than 15,000 of them come to the island every winter. However, do not be surprised if you see flamingos during other times of the year as well. Some non-breeding flamingos stay on the island all year round if the lakes are not completely dry.

Some of the most favourite spots for flamingos are the Cyprus salt lakes. For the most part of the year, they are usually dry, but they fill out during the rainy months of winter and become home for the pink-feathered birds. Most popular lakes are Larnaca, Akrotiri (Limassol), Oroklini and Paralimni lakes. If you want to witness these majestic creatures yourself, add these places to your travel map!

One of the lakes, namely the Akrotiri salt lake, even has a fascinating legend behind its saltiness. According to the story, Saint Lazarus (Agios Lazaros) once asked an old woman for some food and water. The woman refused his request and said that her vines had dried. To this, Lazarus replied: “May your vines be dry and be a salt lake forever more.”

Flamingos that come to Cyprus are not just any flamingos. The exact name of the species is Greater Flamingos (Phoenicopterus roseus). This type of flamingos is the most common, and it can also be found in the Indian subcontinent, Africa, southern Europe and the Middle East. Greater Flamingos range from 110 to 150 cm in height, which makes them the largest among their own kind. Despite being this tall and big, they only weigh from 2 to 4 kilograms, which is very convenient for flight purposes.

If you are an avid birdwatcher or just an aviary enthusiast, you are probably aware that flamingos are not actually born pink. They are born with grey feathers and achieve their signature colour in the process of maturity. Flamingos’ diet of crustaceans, shrimp and blue-green algae is rich in beta carotene, which is responsible for the pinkness of flamingos’ feathers. Flamingos that are kept in captivity can even turn white if they do not receive the proper nutrients.

What you might not know, however, is that Cyprus has seen a black flamingo! For several years in a row, many tourists and residents of the island were able to witness this unique bird flocking with its pink brethren. The reason why this flamingo is black is most likely because of melanism, a condition, which makes the body produce more melanin than usual. As you might have guessed, black flamingos are extremely rare. As far as we know, this black specimen could actually be one of its kind, so have your camera at the ready if you see one.

If you ever decide to visit Cyprus during the winter, you should definitely visit one of the salt lakes for a chance to see the beautiful flamingos in their natural habitat. It is definitely something you will remember forever. However, be respectful to the nature and birds. Do not make too much noise and do not get too close to the flamingos. Let them be and enjoy the beautiful sight from a distance.

A flock of flamingos flying in sunset

A flock of wading flamingos